The Praga Museum of Warsaw is the first museum on the right bank of the Vistula River at ul. Targowa 50/52, located in one of the oldest surviving residential buildings on the right-bank of Warsaw, with a unique prayer house complex (preserved polychromes), in the immediate vicinity of the Różycki Bazaar (the oldest operating market in Warsaw).

The objects covered by the project are of exceptional importance and are unique in the country. In the facilities at ul. Targowa was a former Jewish house of prayer, fragments of paintings depicting Jews praying at the Wailing Wall in Jerusalem and the Tomb of Rachel in Bethlehem have survived on the walls of the prayer rooms. The prayer halls with the preserved polychromes are a unique monument in the scale of Warsaw and the Masovian Voivodeship. The preserved prayer room is of key importance for the functioning of the Praga Museum of Warsaw. It is a valuable source for studying the colors of paintings in Warsaw houses of prayer, known only from black and white photographs. It is also one of the testimonies of the multiculturalism of the district. It is already one of the permanent points on the Judaica route. 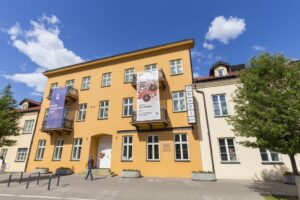 The richness of the cultural heritage of this area, preserved settlement continuity, elements of urban folklore, as well as the awareness of one’s own identity, which can be observed among today’s inhabitants of Prague, a certain exoticism and distinctiveness of the area, are the starting point for extensive research and documentation. All these features contribute to the ever-growing tourist attractiveness of the right-bank Warsaw, which the museum has a chance to improve. This multiculturalism will be particularly emphasized in the permanent exhibition of the Museum.